I prefer to discover a causality rather than become a king of Persia. --Democritus

I have decided to leave Facebook after 10 years (!!!). We may loose contact but don’t worry. You can reach me on my contacts page if you like. I will love to hear about you.

If you are interested why I decided to delete my profile you can read this article.

If you feel relieved that I will stop spamming you by news from world of sluníčkářů/gutmensch/do-gooders, good for you 😉

Technologies have intrinsic aspect - mankind for some time does not understand what to do with it and what consequences it will have:

It applies on information technologies too. Literacy, book printing, photography, telegraph, radio, television and internet. You can read about changes it cause in book Amousing Ourselves to Death (Neil Postman). For example:

But each of those technologies advanced mankind by huge leap. We just realized after some time how to handle it. What kind of legislative is necessary, how to check informations, how much time to spent with it. But it needed a lot of time.

It is the same with Internet. It left military and university environment in mid of 90’s. Since that time it was developing, key technologies were email and WWW. In the beginning only enthusiast used it, then progressive companies and in the end wide public. Services on internet were often paid. Later appeared free services paid from advertisment. But those are big majority nowadays.

It took 20 years before Facebook appeared. Originaly it was designed as US students community tool. It was possible to find there informations about students and teachers.

But the idea spread. People find various ways to use it:

History of my leaving

I found out that Facebook is broken 5 years ago. Out of blue sky it presented to me pictures from birth of my friend’s friend child. I did’nt know that person. Does he understand how many people will see it? After this experience I at least changed visibility settings of my and my wife’s account.

Year or two ago “not having Facebook” trend appeared. It becomed trendy to not have Facebook. Next generation does not care of Facebook at all. Why to be there if your mum and grandma is there too?

In that time I was thinking about deleting my account, but in the end I just removed all persons but my close friends.

Now I have decided to leave. I will describe my reasons below. You may have reasons to stay and that is completely fine. So please don’t take my reasons as moralizing.

I know that quote for many years:

If You’re Not Paying For It, You Become The Product

Because you won’t pay a dime to Facebook, they have to find another way. Ads: 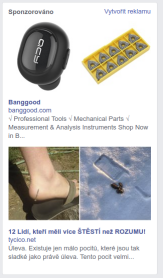 That would be fine. Problem is that Facebook have to collect a lot of details to select best Ad for you. So advertisers can use information such as:

And yes, Facebook may know that information despite you entered them or not. Facebook is analysing your behavior:

Facebook knows you better than you. People tend to have dreamed picture of themselfs. But reality is often different and Facebook knows it.

Did you noticed Facebook offers entertainment in every day and night time? I your physicican waiting room, in traffic jam, on the toilet, …? Even TV does not have that ability because can’t be everywhere and everytime.

Because Facebook knows a lot about you, it can serve you content tailored to you. It can amuse you everytime. Question is what value is in that. What it brings you and how it affects your personal growth.

Do your really want skilful marketing expert, no matter what political party paid it, to influence your choice? I personaly feel like a sheep.

On Facebook I see lives of people I did not meet in person for ten years. And did not talk to them for the same time. We become virtual friends and since then we observe each other. But what sense is in that? When we meet personally it is embarassing when you reallize you don’t have topic to talk about. We know everyting about each other.

Social bubbles are problem. If you follow someone and agree with each of their word, you will never learn anything new. I had some favorites too. But after a while I found out there is no value in listening to them.

Isn’t it better to listen to people with different opinions? Someone who provokes me and force me to start thinking? Consider own points of view?

Facebook is one of sources of hoax and fake news. It seems like Facebook is fighting agains this phenomenons. But that is just camouflage - those phenomenons increases their profit.

And if their algorithms detects that you will probably like fake news, it will serve it. And people like it because it supports their point of view. But that does not make true of them.

So, this are my reasons for leaving. I hope I wrote them comprehensibly.

I dare to be prophet:

See you on such future network! For now at least on Twitter…